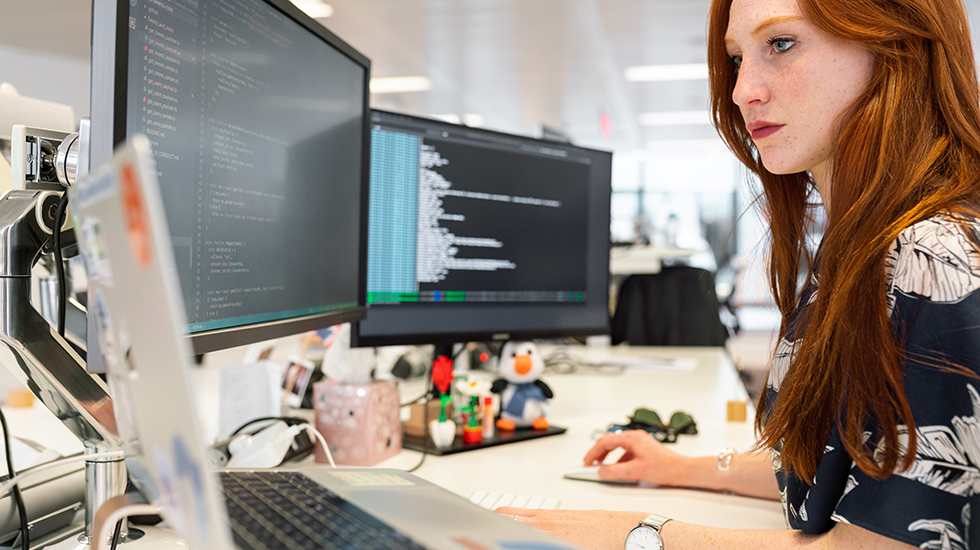 I spoke with Ryan Comingdeer, Chief Technology Officer at Five Talent, about why his company became an Apprenti hiring partner and what makes the apprentices some of the strongest people on his team.

Why did your company decide to participate in Apprenti?

Well, I could talk a whole 30 minutes on that question. As you know, there is a tech talent shortage, not only where we live, but regionally and nationally as well.  There have been periods of time when we just can’t hire enough software engineers fast enough. Our local educational systems are only graduating about 20-30 computer science students a year—and they get hired before their junior year. We couldn’t grab them fast enough, and neither could the other companies in central Oregon. So we were looking for alternative ways to get people interested in this career.

As a software consulting company, we have a very heavy emphasis on well-balanced individuals who have really good soft skills. What’s great is a professional who can work within the team, who can work with our clients, who has good work experience, and who knows how businesses are run in general. They don’t have to be MBA level, but they’ve been in the workforce for a while.

When we heard about Apprenti’s efforts, we thought they were the perfect fit for us, because we heavily value soft skills and work ethic. What our mentality is today is that if you have those attributes, we feel like we can teach you the hard skills at any level. So we invest in lots of training in hard skills to get new employees up to speed.

What we were able to access through Apprenti were individuals who were changing careers, who have shown good work ethic and good soft skills,  who have an understanding of how businesses work in general, and who are just lacking the hard skills and an opportunity to learn. When we heard about that, we jumped on board and said, “yeah, we’ll be guinea pigs in our region—let’s see what this does.”

What occupational roles does Five Talent train apprentices in?

Right now just the Software Engineer role, but we are looking at Dev Ops engineers for the next cohort. We already have committed to the next cohort, which is coming in August, so we’ll be getting four new apprentices. Those are also software engineers. If there’s a third cohort, we would probably start reaching out to Dev Ops as well.

What would you say are the most important things that Apprenti provides to Five Talent?

Apprenti really listened to our needs and invested quite a bit of time to understand what we were looking for in a candidate.  My understanding is they brought us the best people. They filtered out some 200 applicants and they basically did our whole recruiting efforts for us which saves us a ton of time and money. They narrowed it down to a pool of eight individuals who we actually interviewed who met all of our requirements and who we thought fit our culture. From there it was just a question of “do they have the aptitudes.” They did all of the heavy lifting on the HR and the recruiting side of things. They definitely worked with us and made sure we were objective on our learning requirements, and made sure it represented what the tech industry needed as well, not just Five Talent. And that was a good thing, because you want to make sure that if these individuals ever have to leave Five Talent, they are competitive for other dev roles. These individuals need to be well-rounded. If they are changing their career and investing in this path, they can’t just rely on one job or opportunity,

So, I think you already gave an overview of what you specifically look for in candidates, and how Apprenti helps with this—is there anything else you wanted to say on that?

The apprentices who we’ve identified as good fits have various backgrounds—one was a  project manager, one was a graphic designer, one worked in QA. They’ve not been in a software engineer role. Or maybe they were in this role, but it was ten-plus years ago, and they’d like to figure out how to get back in; they just need an option for learning to do that. So we get those people who have been aware of this industry and who have been involved in seeing what it looked like from the outside, and they’re well-balanced individuals, as far as soft skills go. It’s someone who can work well with a team, someone with good communication skills, who knows when to ask for help and when to have their own ambition and investigate things themselves. It’s that common sense in this industry and this context.

What would you tell another company if they were thinking about engaging in tech apprenticeship?

Definitely something that the companies need to be prepared for is that these individuals cannot be siloed. They need more of a support system than the typical junior developer and the companies need to be prepared for that. You have to be very intentional about that, pick some of your key individuals who can help mentor your apprentices, and answer the variety of questions that come up. You can’t treat some of these individuals strictly as entry-level developers—sometimes they need a little more education, or a little bit more support. I would 100% do it again—we’ve already committed to the next cohort. I have no regrets, it’s been very enjoyable for us, and we got more than we were expecting. I’m thinking any other company would have that same experience.

We have two apprentices right now—they came on board in November, so they’ve been here now for nine months. They have both worked out very, very well. For the first 45 days, we paired them up on everything together and basically put them on the same tasks, so they could work together and not feel isolated and try to figure things out together before they asked for help. After that, we started splitting them out based on what we saw were their strengths and weaknesses, which worked well. One of the individuals has really dived deep into software development and is definitely on the path to becoming a good mid-level senior developer over the course of years and has that trajectory lined up right now. The other engineer is now leaning more towards front-end and user experience type of development, which is another one of the needs we’ve had, and she’s excelling in that.

So being flexible is important.  Once you identify what the apprentice’s strengths are and what their passions are–because the computer science industry is pretty broad—you can really then start to focus in on those passions. What we’ve found for both of the Apprenti students we have now is that they are very willing to wear multiple hats and very willing to fill the needs. Because they are career changers, they have done a lot of different things. They have a little bit of expertise, but also that eagerness to be a good team player.

For Five Talent, it is not a requirement that you have a two-year degree or a four-year degree or a master’s degree to be a software engineer.  We are looking for that well-rounded individual, that curious person that has a strong work ethic, and that’s why Apprenti fits us so well. They don’t come out of there with any type of formal certification or degree, and that’s perfectly acceptable to us. I think the industry in general needs to start look at that as an option, as an avenue for hiring people as well. At some level it’s a kind of a trade that can be learned—but it does take a certain mindset and personality to be able to excel at that.

For the individuals who are looking to be in Apprenti, the technical training is intense. And if that doesn’t burn you out, then you’ll be a good fit for the employer apprenticeship. It’s not for the lighthearted, it’s not a thought to go entertain, it is a life decision that has to be thought through.

Why Microsoft is Hiring Apprentices and You Should Too

Many businesses rely more and more on technology these days, which means they need a…

Why Your Company – and the Tech Industry – Needs Apprenticeships

Seattle has never needed skilled tech professionals more than it does now. Tapping into local…

Apprenti is your key to hiring smart. Hire apprentices today.
Copyright WTIA Workforce Institute - All Rights Reserved - This project has been funded in part with Federal funds from the U.S. Department of Labor, Employment and Training Administration under Contract Number 1605C2-20-C-0013. The contents of this publication do not necessarily reflect the views or policies of the Department of Labor, nor does mention of trade names, commercial products, or organizations imply endorsement of the same by the U.S. Government. - Registered 501(c)(3). EIN: 47-3951262
Back To Top