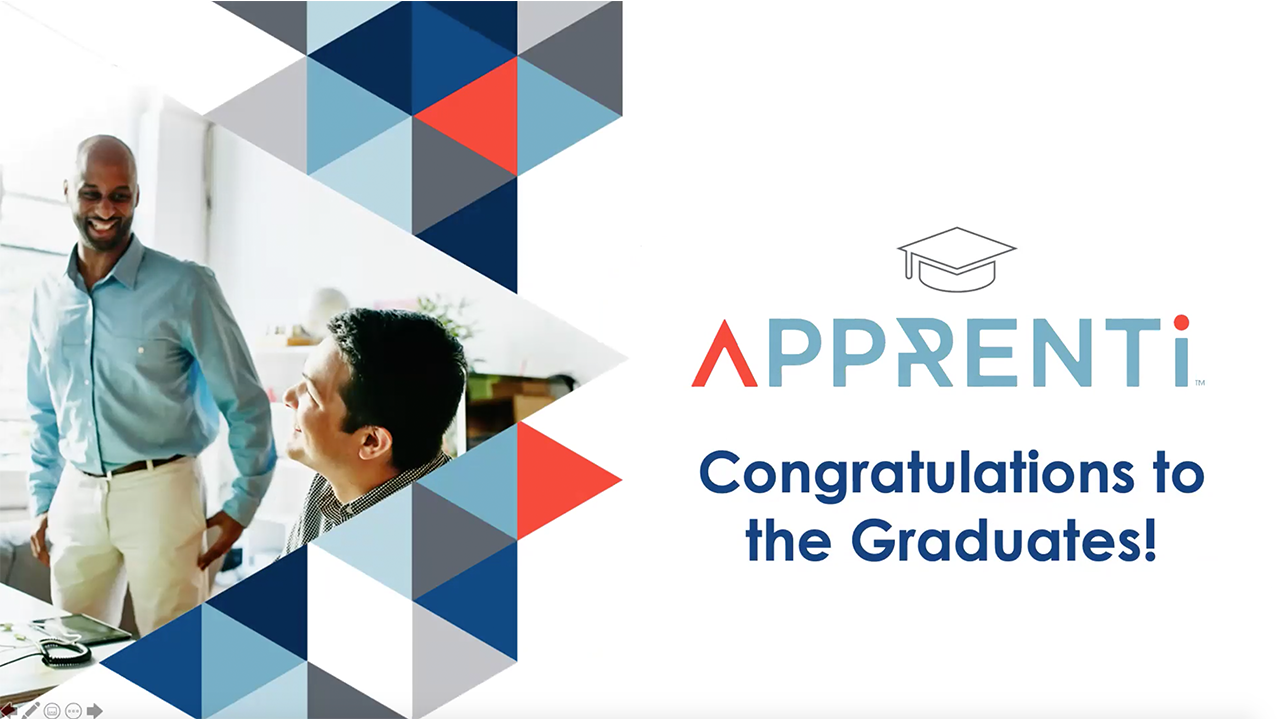 On June 24th, 69 apprentices graduated from the Apprenti program. This was our second quarterly graduation of 2021, recognizing apprentices across the United States. These apprentices trained in a variety of occupations, including Software Analyst, Cloud Operations Specialist, and IT Support Professional, and represented 12 different hiring partners in seven different areas of the country.

One state from which we had a lot of graduates was Massachusetts, which was championed in the early days with our program by Rainer Gawlick, who serves as the chair of the Advisory Board for Apprenti Massachusetts. During this ceremony, Gawlick performed the duties of emcee and was presented with a champion award for all of his work in Massachusetts by Apprenti Executive Director Jennifer Carlson.

Another speaker from Massachusetts was Jim Chilton, CIO of Cengage, one of our hiring partners. Jennifer Carlson awarded Jim with an Industry Partner award for his guidance throughout the years. In accepting his award, Chilton said, “We’ve always talked about how this is life-changing for the people who we are helping, and it’s also life-changing for the people who are fortunate enough to be involved.” Cengage had two Cybersecurity Analyst apprentices, Valerie Munafo and Tomas Bobadilla, graduating this quarter, as well as 12 who have graduated and been retained in the past. Chilton addressed these apprentices and all Apprenti graduates with the following words: “As an employer it makes us incredibly grateful to have people around who are willing to learn and who are excited and grateful for the opportunities that have been provided to them. […] The bonds you’ve created with cohorts and the people inside of your cohort is super valuable, they also have traveled a similar path to you, don’t lose touch with them, stay connected, I suspect that you will be able to help each other more in the future than you may imagine. Don’t confuse your path with your potential. Your potential is what matters now.”

One graduate who was highlighted during the festivities was Lilie Orm, a Software Developer at VMWare in California. Prior to Apprenti, Orm worked as a tax preparer and caregiver. In her spare time, Orm took some classes at her local community college, including Intro to Programming. After this class, coding became her passion. Of course, the barrier for entry in these jobs is pretty high, so Orm was very happy to find Apprenti. “When I heard that I had gotten into Apprenti I was really grateful for the opportunity, and I just really felt fortunate to have access to this career path that I found my passion in. And then, because of that, Apprenti means a lot to me. Now that I’m working as a software developer, I have creative

freedom, I can choose how to do my work, I’m on an amazing team that values my input, and I can now see a brighter future financially, intellectually, and I get to feel passionate about the work I do. I get to feel like my work has meaning, and I never really felt that with my previous jobs.” Another anecdote Orm shared was that she met her husband, who she married a few weeks ago, during technical training. In her parting words, she encouraged the new Apprenti graduates to remember to ask lots of questions.

Another graduate who shared his experiences was RJ Smith, a Software Developer at Amazon, based out of Virginia. Though he could not join the ceremony as he was traveling across the country at the time, he recorded a video beforehand to talk about his journey through Apprenti. Before Apprenti, Smith was in the Marine Corps, worked for the government, and changed jobs a lot. None of these career paths were what he was really interested in, though, before he learned about the Amazon Web Services apprenticeship through Apprenti. In a short speech, Smith advised: “Your success is directly related to how much effort and energy you put into the program. […] Don’t be afraid to break things. When you break things you learn, and the next time it comes up you’ll know how to fix it. […] Never stop learning, be extremely direct with management about your goals.”

Apprenti also took time to recognize J.P. Morgan Chase, a hiring partner who we have placed apprentices with in Ohio, Delaware, and Texas. Carlson awarded an Industry Partner Championship award to Coral Scovner, JPMC’s Vice President of Emerging Talent Programs. Scovner spoke about the way that apprenticeship has changed the way that her company thinks about hiring: “In many recruiting models, companies are consumers of talent, people are building up their skill set on their own with education and work experience and then getting hired. But with the apprenticeship model we are able to become co-producers of talent. […] I truly believe that apprenticeships have a way of changing the American education system and pathway to good jobs. Soon this is going to be the norm.” Two Ohio- based JPMC Software Analyst apprentices, Matthew Zendejas and Tiara Hatch, graduated this quarter.

Also joining us from Ohio was Lieutenant Governor Jon Husted. Apprenti Ohio State Director Kevin Gadd presented him with our Governmental Partner Champion Award. In his speech, Husted praised the apprenticeship model, and told the graduates, “what you are doing is the future of education and work in America. It is

going to help break down the old model, it is going to create a new, efficient model that is great for the student, the employee, and the employer.” Husted gave a shoutout to the Ohio-based graduates, and invited non-Ohioan graduates to Ohio, saying, “we know that if you’re Apprenti tested and talented, then we know that you’re ready to go and add value and lead a great life.”

Following Husted’s speech, Jennifer Carlson addressed the importance of the support Apprenti has received from governmental partners, particularly in Ohio: “They are instrumental in making sure that we are able to operate and able to get done what needs to get done.” Carlson gave an additional note to the graduates: ““Not everybody had to come from one system. We call this nontraditional because you didn’t go through the traditional STEM field of education in higher ed, but it’s not nontraditional in the clinical sense. We want this to be mainstream, we need this as a society to work. And you are on the front end of that. You are the ones who are proving this out, and carrying the torch for everyone who’s going to come after you.”

We are building an alumni network so that past Apprenti graduates can stay in contact, mentor other apprentices, and discuss their passions for technology. If you’re interested in being part of the Apprenti alumni network, check it out on Linked In.

We plan on holding our next graduation on December 9th, in order to honor our next group of graduates. Please stay tuned for more information.

If you missed the event and would like to experience it for yourself, please see the video below:

Apprenti is your key to hiring smart. Hire apprentices today.
Copyright WTIA Workforce Institute - All Rights Reserved - This project has been funded in part with Federal funds from the U.S. Department of Labor, Employment and Training Administration under Contract Number 1605C2-20-C-0013. The contents of this publication do not necessarily reflect the views or policies of the Department of Labor, nor does mention of trade names, commercial products, or organizations imply endorsement of the same by the U.S. Government. - Registered 501(c)(3). EIN: 47-3951262
Back To Top