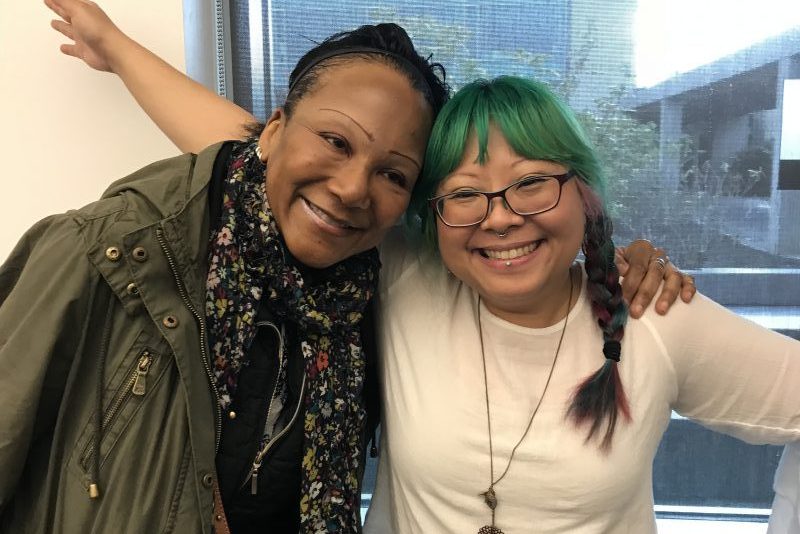 Last December we had our software developer apprentice cohort start its on-the-job training at Microsoft in the Windows Devices Group. This is the very first cohort we have placed with Microsoft and its a very lively cohort, filled with driven and passionate apprentices. Two members of the cohort volunteered to share their stories and experience in this blog post.

How did you first decide to pursue an apprenticeship through Apprenti?

Aeone: An Apprenti representative presented at the Advancing the Careers of Technological Women conference put together by ChickTech and said that the website was launching the next day. I applied soon after.

La: On December 8, 2014, I witnessed President Barack Obama became the first US President to write code. He wrote a single line of JavaScript – “moveForward(100)” – that moved Elsa, a character from the Disney movie Frozen, forward exactly 100 pixels and encouraged me to shift the trajectory of my life 180 degrees. It reignited my passion for technology and inspired me to embark upon a path that I can unequivocally characterize as a dream come true. That instance was truly an “aha” moment as I realized that it was not too late – the possibility of having a successful career in technology still existed for me.

That January (2015), I began learning to code via boot camps, seminars, workshops and online courses. After nearly two years I felt that I was almost ready to apply for a job in the software industry, except for one missing element – hands on experience.

I was looking for an internship program available for people not enrolled in a college or university program and, through diligent online research, I discovered the Apprenti program. I took the entrance exam in January 2017, interviewed in February, was accepted into the program in April, and began the program in June.

What were you doing before Apprenti?

Aeone: I had just gotten a two-year degree in computer science and was looking to transfer to get my Bachelor’s degree but I needed to take a break. My job at the time was as a technical liaison in an insurance company but my background before then had been mostly in retail management, technical support, and customer service to accommodate saving for school. Getting access to higher education had been a long uphill battle for me.

La: I have always loved math, puzzles, and problem solving and considered pursuing an engineering major when I first started university. However, for reasons too complicated and unfortunate to be illuminated, I was discouraged from that path and strongly pushed towards Liberal Arts. So, armed with a Bachelor of Arts in History, I embarked on what I hoped would be a career but instead, unhappily, went from job to job and consistently struggled to make ends meet.

What are you training for right now? How is it going so far?

Aeone:  I’m training as a software development engineer. It’s going really well. I am so excited to be at Microsoft and I’m learning so much.

La: Currently, I am an Apprentice with the Microsoft Windows IntelWorkbench Team and my experience has been wonderful. The team is comprised of extremely bright and supportive people. From the very first day, they have been encouraging, helpful, and always willing to answer questions, listen to ideas, and offer suggestions. Consequently, thanks to the team, my knowledge and confidence has increased exponentially.

What effect has Apprenti brought to your career if any? What‘s your plan for your career post Apprenti?

Aeone: Apprenti has significantly improved my career. Post Apprenti, I hope to continue at Microsoft as an FTE. The discouragement I felt prior to getting accepted to Apprenti has changed completely. I am driven to succeed in this field and to also pursue my passions of technology and education access for all. When my apprenticeship ends, there are so many more possibilities now and I am grateful to Apprenti for opening them up for me.

La: Apprenti has provided me with excellent experience, unparalleled opportunity, tremendous confidence, and abundant hope for the future. Following the completion of the Apprenti program, I hope to become a Full-Time Employee with Microsoft.  My experience with Microsoft has been so positive and the employees are so great, I would love nothing more than to become a full-time contributor to the company’s success.

Aeone: Yes, absolutely! I would recommend it to anybody who is eager to learn, willing to work hard, and foster a growth mindset.

La: I would recommend Apprenti to anyone who is interested in pursuing a career in technology and, for whatever reason, has missed the opportunity to embark upon a traditional computer science path.

If you have an aptitude for math and logic, a strong willingness to work hard to quickly understand new concepts, and if the query “why not me?” resonates with you…do what I did – GO FOR IT 😊

On June 24th, 69 apprentices graduated from the Apprenti program. This was our second quarterly…